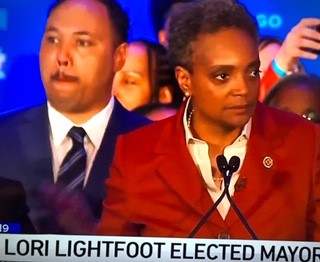 Lightfoot, who had never been elected to public office, easily defeated Toni Preckwinkle, who served in the City Council for 19 years before becoming Cook County Board president. Preckwinkle also is chairwoman of the county Democratic Party.

Lightfoot promised to rid City Hall of corruption and help low-income and working-class people she said had been “left behind and ignored” by Chicago’s political ruling class. It was a message that resonated with voters weary of political scandal and insider deals, and who said the city’s leaders for too long have invested in downtown at the expense of neighborhoods.”

Chicago will become the largest U.S. city to have a black woman serve as mayor when Lightfoot is sworn in May 20. She will join seven other black women currently serving as mayors in major U.S. cities, including Atlanta and New Orleans and will be the second woman to lead Chicago.

Lightfoot, 56, and her wife have one daughter.

Brian Johnson, CEO of Equality Illinois, said the civil rights organization for lesbian and gay people was “thrilled” with the outcome.

“This victory is historic, and it is also an undeniably proud moment for the LGBTQ community,” Johnson said.

Lightfoot emerged as the surprising leader in the first round of voting in February when 14 candidates were on the ballot to succeed Mayor Rahm Emanuel, who decided against running for a third term.

Lightfoot seized on outrage over a white police officer’s fatal shooting of black teenager Laquan McDonald to launch her reformer campaign. That was even before Emanuel announced he wouldn’t seek re-election amid criticism for initially resisting calls to release video of the shooting.

“I’m not a person who decided I would climb the ladder of a corrupt political party,” Lightfoot said during a debate last month. “I don’t hold the title of committeeman, central committeeman, boss of the party.”

Preckwinkle countered that her opponent lacks the necessary experience for the job.

“This is not an entry-level job,” Preckwinkle has said repeatedly during the campaign. “It’s easy to talk about change. It’s hard to actually do it. And that’s been my experience — being a change maker, a change agent, transforming institutions and communities.”

Joyce Ross, 64, a resident of the city’s predominantly black West Side who is a certified nursing assistant, cast her ballot Tuesday for Lightfoot. Ross said she believes Lightfoot will be better able to clean up the police department and curb city’s violence.

She was also bothered by Preckwinkle’s association with longtime Alderman Ed Burke, who was indicted earlier this year on charges he tried to shake down a restaurant owner who wanted to build in his ward.

“My momma always said birds of a feather flock together,” Ross said.

Truly Gannon, a 39-year old mother of four who works as a dietitian, said she wasn’t bothered by stories that portrayed Preckwinkle as an insider aligned with questionable politicians like Burke. She supported Preckwinkle, based on her experience.

“I’m not sure Lightfoot would be able to handle the job like Preckwinkle,” she said.

The campaign between the two women got off to a contentious start, with Preckwinkle’s advertising focusing on Lightfoot’s work as a partner at Mayer Brown, one of the nation’s largest law firms, and tagging her as a “wealthy corporate lawyer.”

In one ad, Preckwinkle criticizes Lightfoot’s oversight of the emergency communications in 2004 when a fire killed four children. A judge ordered Lightfoot to preserve 911 tapes after questions were raised about how the emergency call was handled. The ad notes some of the tapes were destroyed, prompting the judge to rebuke Lightfoot. The ad sparked a backlash from the family of three of the children killed, with their sister accusing Preckwinkle of trying to take advantage of her family’s tragedy.

Lightfoot also responded by scolding her opponent for being negative while also airing ads pointing out Preckwinkle’s connection to powerful local Democrats, including one under federal indictment.

Preckwinkle spent much of her time during the campaign answering for her ties to Chicago’s political establishment. She and her supporters asserted her rise to Democratic Party leadership did not hinder her ability to oppose policies promoted by the city’s ever-powerful mayors.

“My whole career has been about change, and change is action and results, not simply words,” said Preckwinkle, who asserts her experience makes her better positioned to lead a city with financial problems and poorer neighborhoods that are racked by gun violence.

Despite the barbs on the campaign trail, the two advanced similar ideas to boost the city’s deeply troubled finances, which include an estimated $250 million budget deficit next year and billions in unfunded pension liabilities.

Both candidates expressed support for a casino in Chicago and changing the state’s income tax system to a graduated tax, in which higher earners are taxed at a higher rate — two measures lawmakers have tried for unsuccessfully for years to pass.

Lightfoot said that as mayor, she would focus on investing in neighborhoods on the West and South Sides and bring transparency and accountability to City Hall. She added she also wants to restore people’s faith in government.